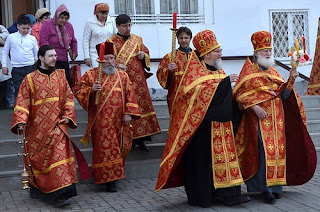 "My people have been lost sheep, their shepherds have led them astray, turning them away on the mountain; from mountain to hill they have gone, they have forgotten the fold."  Jeremiah 50:6 (NRSV)

Christianity has grown old and corrupt.
The sheep have left the fold.
They have been led astray and abandoned.

This sounds strangely familiar.
And not just because it resembles the words of Jesus.

When the covenant grows old and the shepherds become complaisant and corrupt God sends a messenger to prophesy against them.

Christianity has grown old and corrupt.
The shepherds feed themselves and rule harshly.

The time has come to renew God's covenant with humanity.

You have nothing to fear from God.

God does not punish us.
God punishes no one.

God does not force us.
Nor does He threaten or intimidate us.

There is no hell.
Hell is totally out of character for a loving God.

There is no devil.
There are no dark powers, only the goodness of God.

Sex is the consummation of love.
And love is the nature of God.

God loves us.
Even to the very last one.

This is the truth.
Not the carrot and stick religion of rewards and punishments which corrupt shepherds impose on the people.

They serve themselves.
And impose harsh penalties.

In this way they rule humanity.

It is  a millstone around our necks.

Cast it into the sea.

May it be gone forever.