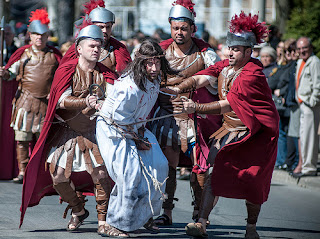 When God reaches out to humanity with the good news of unconditional love and forgiveness what happens is that the powers of this world kill the messenger and steal the message.

What happens then is that they turn the message back into the carrot and stick religion of rewards and punishments because this is what suit the rich and powerful of our world.

The rich and powerful seek to control the masses in order to maintain their position of power and privilege.  And the traditional religion of rewards and punishments suits their purposes perfectly.

Napoleon said that if the Catholic Church had not existed he would have to have invented it.

This is proof that this style of religion suits the powerful.

But this burdensome exoteric religion is not the truth.

God loves humanity unconditionally and He is always ready to forgive.