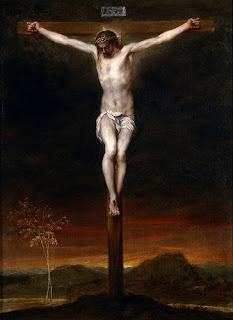 Jesus was the light of the world.

When he was crucified and died the light went out of the world.

What is left is the records of what they said when they were alive.
And this is open to interpretation and manipulation.

So instead of calling this Friday Good because of some fanciful ransom paid by Jesus, we should call it Bad Friday because this is the day that the light went out.

And while the resurrection is a reality, it has no implications for the world or creation, other than that we follow Jesus.


Photo Credit: lluisribesmateu1969 Flickr via Compfight cc
Posted by Michael E East at 21:55 No comments: Links to this post

God is surrounded by people who don't understand Him.

As Jesus found with the Pharisees, places of worship are full of people who are ruled by fear.

When we attempt to make contact with God independently we are overpowered by the evil influences that surround us.

When we join a religious community we are surrounded by fear.

So the struggle continues with devils and bullies on one side and fear-driven bigots on the other.

That is not to say that there are nor good people in the Churches.  There are many who follow the Gospel of Love but they find it difficult to escape the fear that surrounds them.

Perhaps Jesus holds the key when he says, "'Wherever the corpse is, there the vultures will gather.'"  Matthew 24:28 (NRSV)

Where the Christ is, i.e. the absolute power, those who seek power will gather.


(Scripture quotations (marked NRSV) are taken from the New Revised Standard Version Bible, copyright 1989 by the Division of Christian Education of the National Council of the Churches of Christ in the U.S.A., and are used by permission.  All rights reserved.)
Posted by Michael E East at 20:25 No comments: Links to this post

It is easy to categorize people as good or bad.
Usually, of course, we are good and they are bad.

We write people off.
We label them bad and abrogate any responsibility to care for them or help them.

But God's way is different.
God does not reject people as bad.
He loves them also and helps them if they call on Him.

There is no class of human being who is lost or damned.
God loves us all.

That is why we are to love our enemies and pray for our abusers.
Because no one is condemned.

So, instead of writing people off as bad, we should be helping those who do not conform to our idea of goodness.
We should give them aid and pray for them.

Who is to say that we know what is good in any case.
Quite often our ideas of moral superiority are misguided.
We are no better than sinners.

Each human being is worthy in his or her own right.

"'There will be more joy in heaven over one sinner who repents than over ninety-nine righteous people who need no repentance.'"  Luke 15:7 (NRSV)


(Scripture quotations (marked NRSV) are taken from the New Revised Standard Version Bible, copyright 1989 by the Division of Christian Education of the National Council of the Churches of Christ in the U.S.A., and are used by permission.  All rights reserved.)
Posted by Michael E East at 19:26 No comments: Links to this post

We do not seek to replace C.E.O.s but merely to change the way they operate.

In keeping with the principle of Love, C.E.O.s can open their hearts to their workers and employees as a father does with his sons and daughters.

If God is our Father then everyone is family.

What a difference this would make.

The purpose of business would change from relentless pursuit of profit to provision of work for the community.

This would change the whole of our society.

I pray for that.
Posted by Michael E East at 18:48 No comments: Links to this post

When Christians talk about social justice their words go as far as gender issues but never include sexual orientation.

They seem to think that gay rights are somehow too risky, too political. and beyond the scope of Christian compassion.

Although many may privately support equality for gay and lesbian people their support seems never to extend to the public arena.

This is noticeable whenever gay issues arise in public.  Christians seem always to take the anti-position and condemn us outright.  You never see Christians supporting gays and lesbians in the media.

The liberal Churches seem to think that accepting gays is enough.  They never seem to extend their hand to active support.

Considering Jesus Church is exhorted to speak for the voiceless in society it is disappointing that they seem unable to speak up for gays and lesbians today.

Apart from the issue of same sex marriage, there are many gay rights issues today that could be supported by liberal Christians.  It is not enough to just sit on your hands and be silent.

I call on all Christians to overcome their fear and actively support sexual orientation as a human rights issue.

Posted by Michael E East at 21:16 No comments: Links to this post

How can we counteract the Satanic curses and spells that are in our rock music and videos?

Spread the word.
Posted by Michael E East at 23:24 No comments: Links to this post 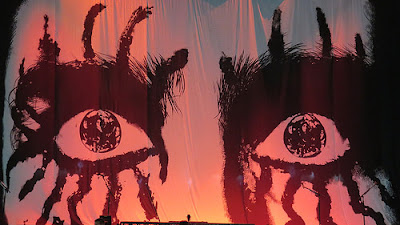 When confronted with the knowledge that rock stars sell their souls to the devil and practice black magic and Satanism in their music most people's initial reaction is disbelief.

This is because people no longer believe in the devil as a supernatural being.  And if there is no devil how can there be any devil worshipers?

The fact that their rock stars and sporting heroes do exactly that is beyond belief.

Most of this is done covertly.
Negative messages and curses are hidden in the music, often recorded backwards.  This works on the unconscious level.

Our task is to bring these things to the surface, up into the conscious mind, where they can be confronted and recognized.

Mostly we are talking about Death.
Death is the basis of black magic and Satanism.
It is a spiritual state in which the person is separated from God.
St. Paul says that the power of Death is in the hands of the devil.

Any reference to death, funerals, decay, black, corpses, skulls, graves, tombs etc. are black magic spells designed to kill you spiritually.
This is often associated with sex or erotica.  As if it was sex that separates you from God as Augustine thought.

You will find many references to such things in your rock music and videos.

Any references to the devil, hell, flames, horns, demons, ghosts, vampires, werewolves, are all Satanic spells.

They will not always use these symbols openly.
Often they will produce a song or a video using positive symbols.  This is done deliberately to disguise what they are doing.  Often these things will be hooks to lure you into their web of evil and torture and madness.

So when these things are brought up to the surface we can see them for what they are - Satanic curses.

And we can leave rock music behind.


Photo Credit: Peter Hutchins Flickr via Compfight cc
Posted by Michael E East at 22:37 No comments: Links to this post

When the facilitator at a recent conference of Progressive Christians asked the group to vote on the issue of gay marriage there was 100% approval.

This was extremely significant.

It seems to me that the development of Progressive Christianity was triggered by the AIDS crisis.

When AIDS struck the gay community in the 1980s the overt reaction of the Churches was to say that God was punishing us for the abominable sin of homosexuality.
They quoted the Bible and threatened us with hell.

Within the western Churches there was an undercurrent.
And this undercurrent was uncomfortable with the official response of the Churches.

Thus group of Christians were moved to reconsider much of what they had been taught in the light of the treatment of sick homosexuals by the churches.

It stemmed from this basic conflict - how could a loving and compassionate God punish one group of men for something that was not within their control, i.e. their homosexuality.

Once this process was begun it progressed to other issues and has resulted in what is now a call for a New Reformation of Christianity.
Posted by Michael E East at 07:14 No comments: Links to this post