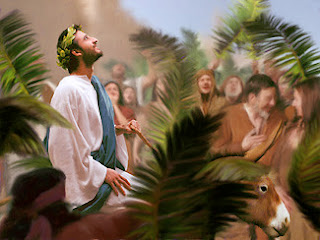 I must admit I am ambivalent about Palm Sunday.

There is a lot of hosannaring and declaring of Jesus as King.

But many in the crowd, and even the disciples, were expecting a political and military King in the style of David who would liberate them from the Roman occupation.

This may explain why many of them turned against him by Friday after he had ignored the Romans and attacked the Jewish religious leadership.

But why did Jesus go to Jerusalem?

Jerusalem was the center of Jewish religious faith.

It was here that the shepherds of Israel had their Temple.

I believe that Jesus' attitude to the shepherds was a reflection of the prophets.

"The shepherds also have no understanding; they have all turned to their own gain, one and all."  Isaiah 56:11 (NRSV)

This explains Jesus' criticism of the Pharisees and his status as a spiritual leader not a temporal one.

So I am ambivalent about Palm Sunday.

I am not sure whether to be jubilant or sad.