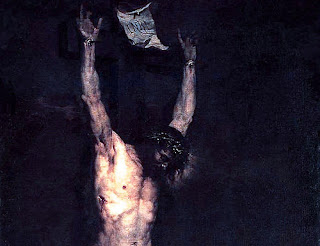 When we think about Jesus' death on the cross it is significant that the people who killed Jesus were the powers of the world - the Romans and the Pharisees.

This is significant because it is the powers of the world who have usurped the authority of God.  And it is they who have instituted the religion of rewards and punishments.

The purpose of this carrot and stick religion is not to obey God but to keep the masses under control.

So if God were to send a messenger who announced the coming of the Kingdom of God on earth it was they who stood to lose the most.

So, not wanting to give up their power and privilege, they killed Jesus and stole his religion.