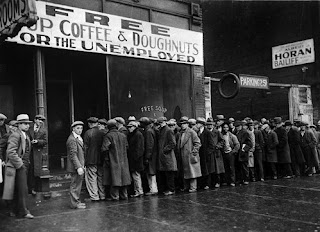 It is interesting to note that the men who invented The End of History and assumed absolute power after the fall of Soviet Communism were all born during The Great Depression.

They ushered in the era of Capitalism which worships money and profit above all things.

And they have corrupted themselves to attain it.

They obstruct any challenge and deceive any questioning.

They control public opinion and conspire with evil.

How could men do such things?

The answer lies in their childhood.

The fear of poverty and unemployment which dominated The Great Depression affected them profoundly as small children.

And this fear has driven them to extremes.

They never feel as if they have enough to be secure.

And their reign has seen evil consequences.

The disparity between rich and poor is at the highest level in history.

Racism and xenophobia are everywhere.

And they exploit everything.

But this generation is passing away.

A new generation of leaders is assuming power.

Hopefully they will not be as fearful having grown up in more prosperous times.

It is yet to be seen whether things will change.

But if something doesn't give we may see violent revolutions in the near future.