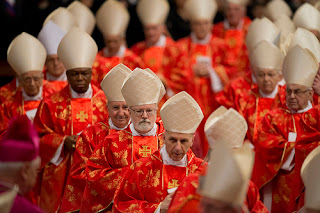 The attempts by some high ranking Cardinals in the Catholic Church to blame homosexuals for the child sexual abuse scandals is yet another example of the Church's seemingly endless capacity to avoid responsibility for what has taken place in its own organization.

Some have called for homosexuals to be banned from ordination.

As if this would somehow solve the problem and absolve them of guilt.

How they could blame homosexuals for the sex-slavery of nuns I don't know.

Homosexuality is not pedophilia.

Sex between two consenting adults bears no resemblance to the abuse of minors.

The Catholic Church seems hellbent on avoiding the question of sexual repression caused by celibacy.

The only way to overcome sexual abuse by clergy is to change the Churches' teachings on sex.

A healthy, positive attitude to our human sexuality is the only answer.

So instead of avoiding the issues and looking for a scapegoat the Churches should look to their own abusive teachings and doctrines.

Only then will the abuse stop,