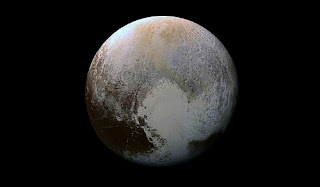 On the 24th of August 2006 Pluto was officially demoted to the status of Dwarf Planet.

This was because recent observations had discovered larger objects in the Kuiper Belt outside the orbit of Neptune which were designated Dwarf Planets.

This coincided with a diminishing of the power of Pluto in human consciousness.

And because Pluto's irregular orbit has also seen it return outside the orbit of Neptune this diminishing has doubled.

So the influence of Pluto and Scorpio is seriously diminished in our experience.

I can only say that this is a good thing.