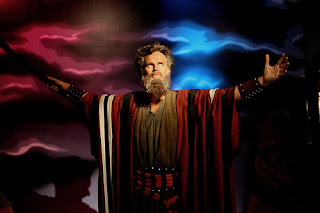 The Old Testament contains many violent and threatening passages.

My thesis is that these verses have been tacked on to visions of God by terrified mortals who were unable to conceive of a God without vengeance.

They succumbed to the temptation to add violence to their visions of God.

And therefore I call them Satanic Verses.

An example of this in the New Testament is The Parable of the Wedding Banquet.

In Matthew there is a terrifying threat attached to the end of the story which is totally absent from the story in Luke.

But the worst example of this must be The Book of Revelation.

The violence and revenge imagined by John of Patmos results from his reaction to the persecution of the Churches.

He could not imagine a God who would reward those who were suffering and not take vengeance on the wicked.

But there is no evidence that God behaves this way at all.

God rewards the faithful who have suffered in His Name but He does not destroy the  wicked.

The wicked He forgives and redeems because their actions are inspired by fear.

So the violent and threatening passages in the Bible should be ignored.

They are the result of ignorance and fear.

They result from the temptations of tyranny and revenge.

They are Satanic Verses.