Breaking Down the Walls. 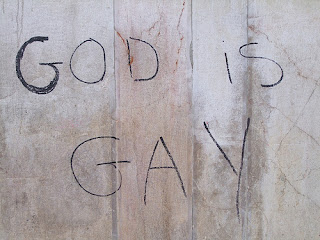 When we read the Bible it becomes apparent that God is in the business of breaking down the walls that divide us.

In the Old Testament God speaks of foreigners joined to the Lord, even eunuchs (banned from the Temple) within His walls.  (Isaiah 56)

God often speaks of those excluded: the widow, the orphan, the alien.....those who are neglected by society.

In the New Testament Jesus speaks to women (forbidden in Jewish society) and foreigners: the Samaritan woman by the well and the Syrophoenician woman.

The first convert to Christianity was a black Ethiopian eunuch.

And when Arab people were excluded from His religion God sent the prophet Mohammed to them.

So it should be no surprise that in the Age of Aquarius God has manifested in the gay community.

God stands on the other side of the wall and says: "Here I am."

He does this in order to break down the invisible walls between us.

So that His House can be a House of Prayer for all peoples.