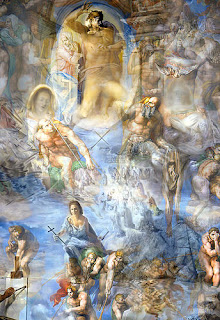 By this he was referring to such things as: demonization and damnation of your enemies, shame, guilt, and fear.

He combined this with astrology and End Times expectations associated with the Millennium and Judgement Day to force changes to society and the political landscape of the world.

Fortuitous events like: the AIDS Pandemic, a Polish Pope, and the rebellious nature of Generation X played right into his hands.

But victory does not justify violence and hatred.

Jesus said, "'Woe to you, scribes and Pharisees, hypocrites!  For you cross sea and land to make a single convert, and you make the new convert twice as much a child of hell as yourselves.'"  Matthew 23:15 (NRSV)