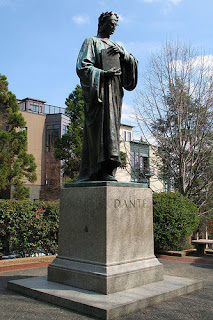 Thanks to Dante we experience schismatism in our world.

I say - thanks to Dante - because it is in his Divine Comedy that he depicts the schismatics in hell.

This has been taken up by Satanists in our modern world who work consciously to divide God's good forces one against the other.

This is particularly noticeable in the Culture Wars between Liberals and Conservatives.

Each side is hardened in adversity against the other.
And each side is trying to win.
But evil forces feed hatred on both sides.

This results in endless conflict.

The time has come for us to put aside our differences and look for agreement between us.

To do this we must look to the very highest manifestations of both Liberalism and Conservatism.

And we must both look at our negatives.

Liberals must look at drug abuse, promiscuity, and license.....

Conservatives must look at racism, homophobia, and rigidity.....

If each side agrees to curb the negative aspects of their position and stress the highest manifestations then there is hope for us all.