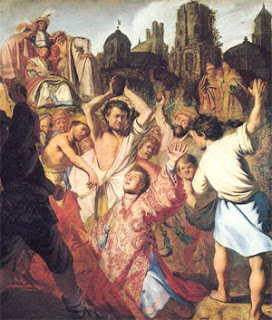 When confronted with sex and pornography many religious people will harden their attitude out of fear.

Fear of punishment for sexual immorality (which was drummed into them as children, possibly with physical beatings) causes them to harden their hearts.

This results in stoning the devil, as we see in the Islamic world, which can result in physical stonings of people convicted of sexual immorality.

The equivalent in the Western World is public disgrace, as was seen with Oscar Wilde, and more recently with Mike Tyson, Tiger Woods, and Wayne Carey in Australia.

Sexual indiscretion has taken on a new virulence with the advent of feminism. Women seem more than ever to use sexual indiscretion to destroy men - the crime seems always to be against women  - the wife or the girl involved - as we saw with Bill Clinton.

So there it is - fear of hell-fire and the fury of women causes the overt punishment of sexual immorality in a society which prides itself on its liberalism.