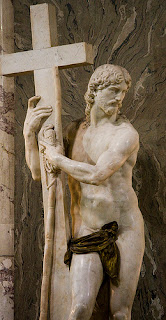 Jesus was a very feminine man.

He was soft (not hard), gentle (seldom aggressive), forgiving (not punishing), and loving (non-violent).

When someone called Jesus effeminate my minister became angry and upset.

The same thing happened when someone suggested that Jesus might have been gay.

These are examples of gender bias and homophobia in religion.

If God is both masculine and feminine then God actually resembles gay men and women who have a strong combination of both sexes.

But God is not only feminine either.
His love is steadfast.
His truth is uncompromising.
His faithfulness is eternal.

He is strong (but sensitive), powerful (but non-violent), intelligent (and artistic), creative, loyal, reliable, and courageous.

So God manifests both masculine and feminine qualities as the Father/Mother of all creation.