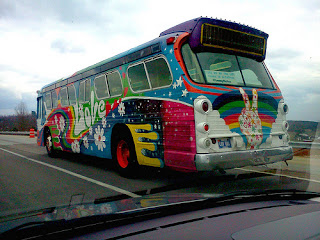 Of course we must be constantly on our guard to ensure that the New Paradigm is not hijacked by those who would sabotage it - rock stars and celebrities who have sold their souls to the devil.

Rock stars captured the driver's seat of the movement and steered it away from its idealistic purpose.
Peace and love became pleasure and sex.
Selfishness replaced altruism.
Drugs replaced spiritual experience.

This is the disaster of the hippies.
Sex and drugs and rock and roll replaced world peace and equality.

And it only got worse.

In the 1980s hatred and violence turned on them and the devil worshipers sent them to hell.
Rock music revealed its true origins in Satanism.

But young people refused to believe that their rock legends were evil.
They resurrected them and now they rule alone.

We must make sure that they don't take the driver's seat of Progressive Christianity as they did the idealism of 1960s and 1970s.

It is my job to expose them.

And return the Age of Aquarius to the hands of God.